Helianti Hilman, the founder of social enterprise Javara is on a mission: to preserve Indonesia’s culinary culture, uplift farmers and highlight the craftsmanship stories of small batch-produced food. These items are so unique, even Indonesians would do a double take. Think along the lines of salt extracted from plants or single blossom honey harvested by “bee-whispering” shamans whose ancient knowledge allow them to herd bees to certain flowers.

Despite being home to a massive market of nearly 300 million, the country is still a divergent nation with rural populations scattered across thousands of islands. The challenge is not only in accessing remote areas but also in taking rare artisanal products mainstream and educating producers on market mechanics.

Not that it’s stopped the former lawyer and King’s College alumni. In fact, her passion for food and a concern that these foodways are disappearing prodded her into action. In 2009, Javara — which means champion in Sanskrit — was born.

“If it is forgotten and if the old farmers and producers pass away, then it’s gone,” she says. “So I was thinking as someone who likes to cook, there must be a market that would appreciate all these ingredients.”

This was by no means an easy task. Seeking potential farmers to work with often meant travelling for months at a time and living amongst them to understand their way of life.

In the span of a few years, her work and success was quickly recognised by organisations like EY and Forbes Indonesia. By 2015, she was named Asia Social Entrepreneur of the Year by the World Economic Forum. Today, her company has grown to include a network of nearly 60,000 farmers and 20,000 artisans who put out over 850 types products — a third of which are certified organic for the US, European and Japanese markets.

The social enterprise has certainly moved from being domestic-oriented to an exporting one with 55 percent business from abroad. Most of this is in Europe though the brand recently arrived in Singapore. We sit for a chat with Ms Helianti to learn about her journey, why she chose to do this and what it means for a shopper to be political.

How did you get started?
Not by design [chuckles]. I was introduced to a network of indigenous farmers — I don’t have a food background. I was a lawyer but I like to travel and cook. So when I was introduced to this network, I was excited to see all these ingredients that they have. I felt like a kid going to a toy store. I started to look at it and I said, “It would be a pity if we lost them.”

What was the first product?
It was the ancient rice collection. It comes in a basket. We had 8 of them in small packages and we put it in a bamboo packaging. It attracted a lot of people who’ve never seen that Indonesia has different shades of red, black and even purple rice.

How do you get to know all these farmers?
I was lucky because in the beginning, it was them who invited us. We didn’t invite ourselves. So there’s lots of travelling. My husband and I, we can travel for three months, two weeks at a time. That’s how we get to know the farmers. The best way is really to live, go to the field and eat with them. That’s how we meet the farmers and understand the potential.

What’s the rarest product that you currently carry in limited amounts?
We do have plant-based salts and we also have a highly demanded single blossom raw honey. So we have clove blossom honey, tamarind blossom honey and things like that. It’s rare because we use a wild stingless bee. To be able to get the product we have to work with local indigenous shamans who herd the bees towards the forest that’s blossoming with a particular flower. 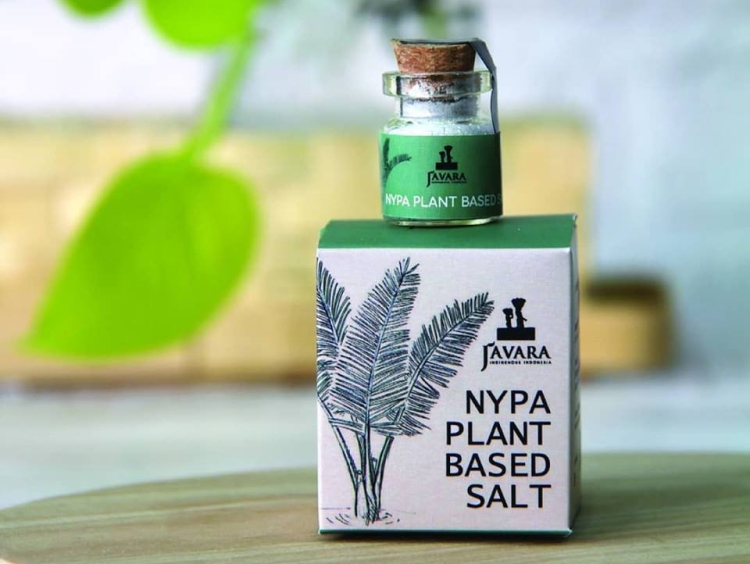 What about these plant-based salts?
There are two types. The first is that the plant is already salty, so we extract the saltiness to become the product. Because the indigenous way of using it is to just put the plant into the soup or food. But of course, that can’t be used for selling commercially. The other one is where the plant is used as the medium to extract the salt and get a particular flavour profile. For example, we have a producer who use a few leaves and banana salt to soak in a salty spring water, sun dry it and once the crystal salt comes out, he harvests them. It’s then burnt and made into a charcoal salt.

What are your future plans? I know you have a book coming out.
Yes so basically the book is more on a documentation of our journey in the last eight years. I’ve been writing this for three years. A lot of these indigenous plants are already disappearing. I have to regrow them to take the pictures. I can’t wait for the farmers to send it to me because it will be rotten by the time it gets to Jakarta. It’s really an ingredient book where I talk about the heritage of each item.

Has being an entrepreneur taught you any lessons?
Of course, both personally and professionally. We became very careful in choosing our food as well to make sure that the food that we eat are healthy, traceable and ethical. In terms of professionally, I think with the organisation growing so much with more farmers joining us, I can’t act as an artist. I’m more creative and less business-driven. But when you want to grow the impact and reach out more, I’m forced to think about scaling up the business so we can serve more farmers and provide consumers with healthier options. So that’s how we change.

We grew a lot. At the beginning, we focused more on organic-certified commodities. But that wasn’t enough, so we moved towards branding commodities because it’s important to build the relationship between the consumers, us and farmers. It’s through the branding, the story and the packaging. But we know that even that alone is not enough so we moved to added-value products.

What does that mean?
For example, rather than just selling green beans, you sell roasted green beans, coconut jam instead of just coconut sugar. And then you become more competitive, and have a different position when you penetrate the market. And now we evolved again with our own store and restaurants. A lot of supermarkets are reluctant to take our products because we’re a little ahead. The market is not ready and many of the supermarkets are not ready to become trendsetters.

So we decided, if no one is going to take it, we’ll create our own store. Surprisingly, our own store sells more of our products compare to our sales to the supermarket. That’s when we started to realise that we can create a voice for our farmers, and a stage for the entire range of our products. Because the ingredients of our products are sometimes a little too bizarre and exotic, we try to educate our consumers through a restaurant.

What’s the restaurant like?
It’s in Jakarta and we’re collaborating with chef Ragil. He’s designing and managing the restaurant, so I leave that to the expert. Restaurants are not my expertise but chef Ragil has been working with Javara the last five, six years and we supply our ingredients to his restaurants.

It’s going to be called Javara Culture — a hub where we can eat, shop and learn. We have a food lab for Seniman Pangan to show the consumers how we develop the products at the artisanal level so they can see the production at the small scale.

You’ve mentioned before that farmers should be celebrities. Could you elaborate?
We’ve been experimenting with that. Since 2012, we’ve been bringing farmers abroad, giving them exposure and a stage for them to tell the story. It has been very effective for encouraging and motivating the farmers. It’s not only about increasing the income, but also about building respect, pride and dignity for their profession.

Has it helped?
Yes it’s really interesting because when I started eight years ago, I was the lone ranger. And you can see that our work has been inspiring a lot of young food startups and more young people going into farming. We have overseas graduates deciding to become full time farmers after a one year internship with us. We can see the shifting of times. In the beginning, almost all our partners are above 65 years old and now 40 per cent of our partners are below 35. So you can see, that alone speaks about how the system has changed the mindset and their own appreciation for themselves. What we do is not about increasing incomes. It’s about increasing industry’s resilience, self-respect and entrepreneurial character within them.

Last question: For those who are new to your products, what message do you have for them?
We have to realise that consumers have a political voice. How they choose their food can change the food system and the food supply chain. When they are more aware and responsible in their food selection, choosing products that are ethically produced, ecologically produced, that respect the farmers and the planet, they are exerting political influence to change the industry.