Every Singaporean child – at least in my generation – grew up playing with erasers that bear country flags. It was a “wrestling match” where the winner flips his eraser to land flat on the other.

Everybody wanted to be Singapore, or Australia, or the US. Nobody wanted to be Iceland. That eraser bearing the unknown flag was chucked at the corner of my study table and long forgotten. Hapless Iceland never did get to enter the ring.

Yet twenty years later, I’m in a plane landing on a mysterious airstrip at Iceland’s Keflavik International Airport. All I could see outside the rectangular windows is soil a shade of menacing black for miles and miles out and grey skies. The clouds were even greyer, hanging overhead like ominous, giant blimps. In the distance, the sight of white mountains, pristine and perfect.

But inside the airport, it was a different story. Keflavik International Airport is small, but the space is a hive of activity. There are tourist shops and restaurants buzzing with people, kiosks filled with the strange and wondrous — even a Joe & The Juice outlet with their “Tunacado” sandwiches and their “Ironman” shakes.

It’s clear that tourism has played a massive recovery role in the years since the banks collapsed in the 2008-2011 Icelandic Financial Crisis. Today, tourist arrivals outstrip the number of residents. In 2016, 1.7 million people visited the Nordic island nation. In comparison, the country is home to just over 300,000 people — a third of whom live in its capital, Reyjkavik.

But that’s a good thing, at least for a traveller. Despite the rise in tourist numbers, the country is vast enough to still feel isolated. It didn’t take long to feel that way; once our jeep sputtered out of the airport leaving the tourist buses behind, the roads were vast, straight and mostly empty.

Where to stay in Iceland
Iceland is the sort travel destination where few would recommend staying in its capital city, Reyjkavik. There isn’t much that’s impressive in there and the city starts to feel like yet another Nordic town after just a few hours of walking. If you insist, one or two nights is more than enough to check out its highlights, chief among which are its indie music scene, and if you’re a gourmand, the Michelin-starred Dill Restaurant.

Instead, head out to the outlying areas. Iceland’s magic lies is in its natural attractions — much of which exude a dark allure. Driving is essential here so get a guide or if you’re adventurous enough, rent your own car though the roads can be treacherous and slippery given the unforgiving frosty climes. These attractions can be quite far apart so expect long drives that stretch for hours.

To save time, check out some of the accommodations dotted throughout the sparse country but Airbnb seems to offer the best options to suit all budgets. There are luxurious, beautifully designed villas smack in the middle of the nowhere with your own geothermal baths as much as there are rooms in the little suburban towns.

Home in Iceland for us was a quaint wooden lodge just off a hot spring hamlet called Hveragerði, 45km south of Reyjkavik. It had a modest mountain in its backyard and views of a snaking river just beyond the snow-covered fields. But the main reason to stay in an Airbnb place? The freedom to cook. 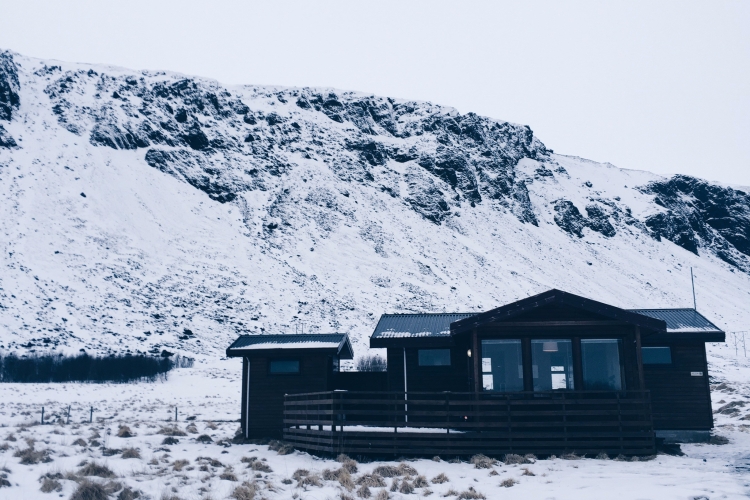 What to eat in Iceland
There are no food options in Iceland one would consider “cheap”. Expect restaurant prices when you’re dining anywhere in Iceland. Hole in the wall eateries will easily set you back S$30 a person for lunch, and that’s assuming the attraction you’re at even has a place to eat. Many don’t.

An easy way around this is to pack sandwiches. Here, grocery stores will be your saviour. A chain of stores called Bonus is known to be the cheapest, and also the most common in towns. The selection is wide, but simple and you would be able to get quality daily essentials.

My favourite though has to be the walk-in cold section where the dairy products sit, and it was here that I discovered an Icelandic staple: skyr (pronounced skeer)

It looks like a tub of yoghurt and that’s what I certainly thought it was when I first lobbed it into my basket. But skyr is unique to Iceland even though it was brought over from Norway over a thousand years ago. The tradition of making and enjoying this product faded out across Scandinavia but kept alive on Iceland.

“It’s viking food,” jokes our guide when I asked him what it was on one of our long drives. It tastes milder than yoghurt with a much higher protein content — perfect if you’ve been hitting the gym.

Got mjólk?
But what makes skyr so unique is that it is made from the milk (or mjólk as they say) of Icelandic cows. It’s a unique pure breed that has lived in isolation for thousands of years ever since the first vikings arrived with the herds of cows, goats and horses on this land. A 2014 survey showed that there are only 30,000 of these dairy cows all of which, according to our guide, are individually named by their owners.

So how would the cheese of these unique viking cows taste like? Unfortunately, Iceland doesn’t have a strong craft cheese tradition. The bulk of Iceland’s dairy output goes to M.S. Iceland Dairies — a cooperative monopoly which includes over 700 family-owned farms. There, the milk is treated and processed, turned into butter, skyr and cheese — often mass produced products that wouldn’t quite register on a gourmand’s radar.

It was only until recently that craft cheese was given life and those wanting a taste can check out Búrið, a cheese store in Reykjavik. The establishment is at the forefront of a growing Icelandic cheese movement and has an aim of educating and showcasing unique Icelandic cheeses like Ísbúi and Stóri Dímon.

Other ingredients I was mildly obsessed with was fish. Now, we’ve all had brown trout or arctic char, but the the Icelandic fish tasted so pure, it was striking. On the way to our wooden lodge, we stopped by Fiskverslun Hveragerðis, a fish specialist which had fresh fillets laid out on white trays. Each of them was white and pearly — I couldn’t wait to take it back, grill it with some butter and just have it on its own with a wedge of burnt lemon.

I got the first two: Ýsa, which means haddock as well as Þorskur, which is cod. 2090 Icelandic Krona converts to SGD27. Both tasted so pure, with a mouthfeel distinct even from the Japanese varieties that we get in Singapore. This quality wasn’t just my imagination either. “In 2011, the Portuguese paid 1.06 euro more per kilo for cod from Iceland than from Norway,” read this source.

That same publication attributed the difference in quality to how Icelandic fish are caught — by longline which uses baited hooks in an effort at prioritising sustainability as compared to net fishery in Norway.

While I can’t verify that it’s true, I had a far more romantic explanation: the waters.

Go Chasing Waterfalls
Water is everywhere in Iceland. There are rivers upon rivers, giant roaring waterfalls to remind you of your place in the universe and massive craters filled with water that’s been frozen over. But it is not these impressive tourist attractions that I take home with me. It’s a quiet moment where I managed to lean over into a stream, dip a cup into the water and have a long, refreshing drink.

As a food writer, I talk a lot about provenance. I talk about the origin of the ingredients and how it is prepared. In doing so, I forget that the most basic building block of everything we eat is really just water.

Being able to drink from a lake to me was a privilege I would never forget. In land-strapped Singapore, our source of water comes from neighbouring Malaysia, the limited reservoirs and treated wastewater — the stuff that come out of our toilets.

There was a strong hint of minerality and crispness, but most of all, it was the purest water I’ve ever tasted. It felt like all barriers between man and nature disappeared, that I was finally tasting what the earth provides at the most primal level.

Icelandic fresh water from its source remains till this very day, the best thing I’ve tasted — not just because of its quality, but for what it represents; clarity, purity, simplicity. Three traits that serve as a reminder that the greatest pleasures in life are often the most basic.

Perhaps I shouldn’t have chucked that eraser bearing Iceland’s flag out of sight. Two decades later, this great Nordic nation entered the ring, and won without even trying.

There was an error retrieving images from Instagram. An attempt will be remade in a few minutes.